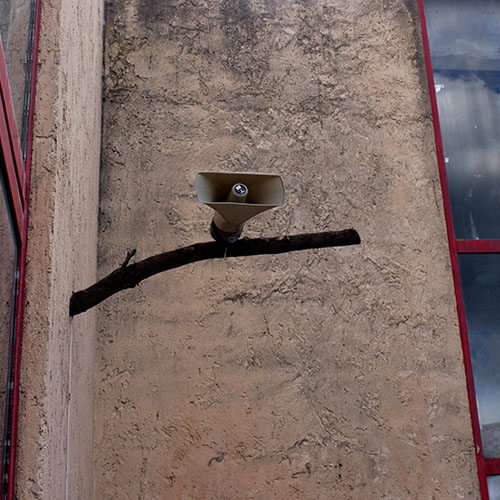 In 1957 Mohamed El Badji, Chaabi music singer and songwriter, was imprisoned and sentenced to death in Serkadji, Algiers. While in prison, he had the habit of making the call to prayer to the attention of his fellow prisoners. A prison guard once commented, saying ‘’ Sing, sing you the bird in your cage, sing love or rage ‘’ This phrase encouraged El Badji to write Meknine Ezzine (pretty goldfinch), which later became one of the foundations of chaabi music.

This sound installation, which is titled after the song, broadcasts a goldfinch singing five times a day. It takes a critical look at the concept of restricted religious freedom, dictated and imposed by the West today through its media.

During Algerian war, a death row inmate had only his voice as means of freedom to invoke his god, and allowed him, by the call to prayer, to escape from his jail …